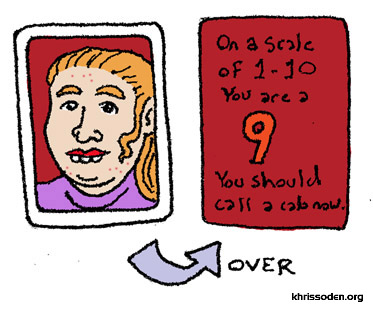 I came up with this idea while I was alone at the bar, trying to decide whether I needed another beer or not. I was thinking that it would probably be a good idea if you could somehow gauge your own inebriation using a standardized method, because of course you never think you’re as drunk as you actually are. Anyway, here’s the idea: you have a deck of fifty-two cards, with a photo of a lady printed on the face of them. These ladies range from being moderately attractive to very ugly. You pull one of the cards, look at the woman on the card, and decide if you think that she is attractive or not – basically, you rate her on a scale of “One to Ten”. Then you flip over the card, and see what it says. The reverse side of the card has a number in a scale of its own printed on it, essentially in inverse proportion to your own “One to Ten” scale. Thus, the moderately good-looking lady would be a “one”, and the horribly-disfigured lady would be a “ten”. It operates on the basis of beer goggles: the drunker you are, the lower your threshold of standards of beauty becomes, so when you’re looking at a card and you’re like,”That is one fiiiiine lookin’ lady! I wish she was sittin’ on this here barstool right next to me!” and then you flip it over and it reads “Nine”, you’ll be all like “Woah, I’m nine out of ten drunk! I should get the hell on out of here!” There’ll be a series that depicts dudes as well, for those people that prefer dudes over ladies.

I foresee this product as also being very useful for bartenders: “Hey, buddy, what do you think of her?” [Bartender flips a card down.] “Sheee’sh a beaut!” [Bartender flips card over, revealing the high number.] “I’m sorry my friend, but you’re cut-off.”

I’ve got to admit that this product is somewhat controversial, since it relies on the assumption of a standardized concept of beauty. That’s a problem for the Marketing Department, not R & D.